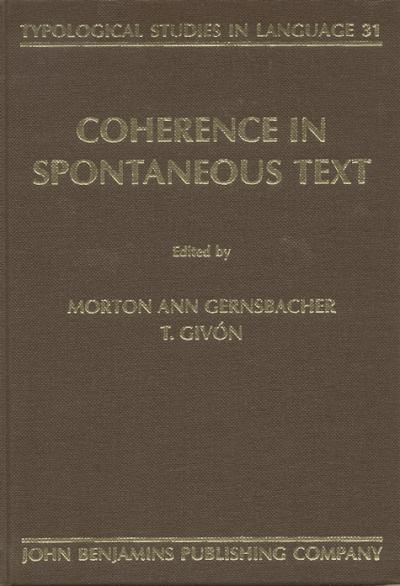 What does it mean for a text to be “coherent?” The contributors to this volume have struggled with this fundament, but perplexing, question. Their answers are provocative, insightful, and surprising in their overall coherence. The theme that binds the collection of papers in this volume is, simply put, that coherence is a mental phenomenon. Coherence is not an inherent property of a written or spoken text. Readers or listeners can indeed judge with high agreement that one text is more coherent than another. But neither the words on the page nor the words in the speech stream of themselves confer coherence. And although a less coherent text impedes comprehension, neither the printed sentences nor the spoken utterances cause those impediments.

In producing and comprehending a text, be it spoken or written, the interlocutors collaborate towards coherence, negotiating for the common ground of shared topicality, reference, and thematic structure- thus toward a similar mental representations. During conversation, the negotiation takes place collaboratively between two (or more) active participants. During writing, revision and editing, the negotiation occurs cognitively between the writer’s own mental representation and his mental representation of what he/she assumes the reader knows. Conversation-spontaneous face-to-face communication – is thus the primary evolutionary template that shaped the cognitive mechanisms of text production and comprehension. Non-conversational text merely piggybacks on these fundamentally interactive mechanisms. This view of coherence emphasizes the speaker’s and writers’ ongoing effort to achieve coherence with their listeners or readers. The measurable litmus test for success is then the readers’ and listeners’ coherent comprehension. Coherence thus emerges not in the text, but in the two collaborating minds.

Anne Anderson presents a striking demonstration of how participants in conversation negotiate for coherence in a laboratory problem-solving task. Her subjects draw on common landmarks and negotiated utterances to achieve their goals. Anderson also demonstrates the developmental course of negotiation. Her data strongly support the hypothesis that negotiating for coherence during discourse is a skill that must be acquired.

Jennifer Coates tackle the questions of the Wittgensteinean extreme bounds of coherence-tautology and contradiction. The first represents maximal coherence to the point of manifest redundancy; the second represents minimal coherence. Working from conversational texts, Coates shows how speakers negotiate instances of both tautology and contradiction, so that what could – from a purely logical perspective – be either redundant or incoherent acquires communicative coherence during the process of negotiation.

T. Givon frames the main theme of the volume, that coherence is fundamentally not a property of the text but rather of the mind that produces or interprets the text. Cognitively, coherence is constructed with the aid of both domain-specific (lexical) knowledge and grammatical processing cues. Both processes contribute to the construction of both local and global coherence links.

Charles Goodwin demonstrates the flexible, negotiable nature of the coherence that emerges during conversation, where both local and global construction of what is ‘the topic’ contribute to specific coherent interpretations of the communication.

Walter Kintsch explores the contrast between knowledge-driven and grammar-driven processes of building coherence, suggesting that the two mechanisms operate in parallel as ‘strong’ vs. ‘weak’ text-comprehension strategies, respectively.

Tony Sanford and Linda Moxey argue that coherence must be ‘in the head.’ They illustrate this with texts that are stylistically cohesive but communicatively incoherent. Their subjects, in comprehension tasks, fail to comprehend the meaning intended by the texts’ authors because they overly-activate their associated knowledge.

Tom Trabasso, Soyoung Suh and Paula Payton investigate the emergence of global coherence links during comprehension. Their laboratory experiments outline the mental representations that must be activated in readers’ mind for successful comprehension.

Matthew Traxler and Morton Ann Gernsbacher argue that writers also negotiate for coherence. During writing, negotiation for coherence is considerably more difficult because the writer’s or editor’s audiences is not available as active collaborators. Instead, the writer must envision – indeed imagine – the mental representation that the written texts would prompt in the reader’s mind. To the extent that the writer is successful in guessing the emerging text-representation in the reader’s mind, the written text will judged by readers to be more coherent.

Deanna Wilkes-Gibbs presents both arguments for and laboratory demonstration of the way participants in conversation negotiate for coherence. Conversation participants engage in turn taking and question asking to establish common ground and mutual representation. Moreover, listeners’ memory representations are greatly affected by their assessment of common meaning as they converse.

Most of the papers in this volume were originally presented at the symposium on Coherence in Spontaneous Text, held at the University of Oregon in the spring of 1992. We are indebted to the Institute of Cognitive and Decision Sciences at the University of Oregon, the Keck Foundation of Los Angeles, and the Shaolin-West Foundation of Durango, Colorado for their financial support; to Vonda Evans for logistic support on site; and to our publishers, John Benjamins of Amsterdam, for seeing merit in the volume and taking it on sight unseen.