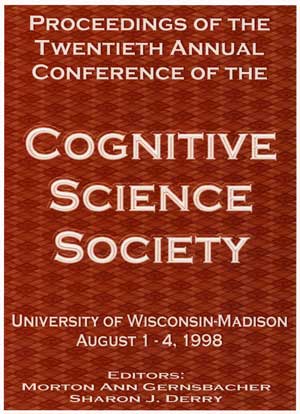 The theme of interdisciplinarity was reflected in several ways during the four-day conference, which was held on the University of Wisconsin-Madison campus, August 1 – 4, 1998. During the opening session John T. Bruer, President of the James S. McDonnell Foundation, addressed the entire conference with his presentation, “Cognitive Science: Inter- and Intra-Disciplinary Collaboration.” Two invited symposia specifically addressed interdisciplinarity as an object of empirical and theoretical research. The first, organized by Rogers Hall and titled, “Analyses of Work Across Disciplinary Boundaries” brought together scholars from linguistics, psychology, and library and information science to examine the nature of cognition within interdisciplinary practice, taken as a recurrent and important feature of our culture. Based on ecological studies representing a range of approaches and settings, each speaker offered a theoretical account of how interdisciplinary activity is structured and represented. The second symposium, organized by Christian Schunn and titled, “The Interdisciplinarity of Cognitive Science,” brought together scholars from the fields of psychology, philosophy and computer science to critically examine the history, status and nature of interdisciplinary collaboration within the field of cognitive science. At the time of the conference, the texts of the plenary address and invited symposia were being developed as core chapters for an edited volume. In organizing these talks and arranging for their publication, our intent was to motivate reflective discussions of practice and community within the cognitive science society, in addition to promoting research and discourse on interdisciplinarity.

Our CogSci98 program promoted interdisciplinary integration in traditional ways, as well. For example, cross-disciplinary community was encouraged through several invited tutorial symposia designed to educate and broaden a general cognitive science audience. As in previous years’ programs, the topics of these tutorial symposia were those likely to hold general interest to the cognitive science community but not typically well represented at the annual meeting. They included Communication Disorders, Computational Vision, Evolutionary Cognition, Educational Dialog, Affective Neuroscience, and Math and Science Education. Each tutorial comprised three survey talks by a leading researcher and time for audience questions and discussion. Emphasis was placed on the tutorial nature of these talks and the breadth of the audience. Five of the six tutorials represent cognitive science strengths of the University of Wisconsin-Madison and were organized through the generosity of our Wisconsin colleagues.

Also, a traditional general “Call for Papers” was issued to the full society and beyond, encouraging submissions for symposia, spoken papers, full posters, and abstract posters (a feature introduced in 1996). Submitted presentations were evaluated for their ability to transcend their disciplinary boundaries and truly address the breadth of the community of cognitive scientists, in addition to being evaluated for their technical and theoretical merit. More general papers and symposia were scheduled on the spoken program, and more specialized topics were assigned to poster sessions. Submitted presentations are represented in these proceedings as “long papers” (those presented as spoken presentations and “full-posters” at the conference) and “short papers” (those presented as “abstract posters” by members of the Cognitive Science Society).

Last but not least, the theme of interdisciplinarity was captured in our CogSci98 logo, inspired by the late Donald T. Campbell. Well-known as a methodologist, Campbell was also a scholar of interdisciplinarity. He held that a comprehensive multiscience must form a continuous texture of narrow specialties that overlap with one another. “Interdisciplinary programs have been misled by goals of breadth and multidisciplinary training.” What must be recognized, he argued, is that interdisciplinarity is a collective product, not embodied within any one scholar. It is achieved through the fact that multiple narrow specialties overlap; through this overlap a collective communication, a collective competence, and “omniscience” is achieved. Probably with tongue in cheek, Campbell named his theory “the fishscale model of omniscience.” The Conference Organizers purchased a commemorative tile at the Frank Lloyd Wright Monona Terrace Convention Center, the site of our conference social, engraved with our fishscale model of Cognitive Science. The CogSci98 logo tile serves as a tribute to our most recent act of collective communication, collective competence, and collective good humor our co-organization of this conference and its program.

<< Back to Additional Resources